Welcome back everyone! This is the notes from the robotics meeting that occurred at 5:30 PM on Monday. There were quite a few important discussions, so please read the entire post.

WE ARE GOING TO ST. LOUIS! (LINK to list of teams invited)

Now, St. Louis is quite far away from St. Mark’s, and we need to move the robot all the way there. One possible way of moving the robot is by putting it on a crate we used previously. The crate has an outer dimension of the following:

If we use the crate, we will have to disassemble the robot slightly (which is allowed as long as we don’t work on it) to lower the conveyor belt.

Also, the crate was designed to fit the old robot, which had different dimensions (and had  bumpers.) We should also figure out how to make the robot fit tightly on the crate.

We should also figure out if our robot is capable of putting three totes on top of three on the scoring platform. (3+3)

Note that we only have three recycling containers in our field at the beginning of the game, so unless we get more containers from the step, we can only put a container on three stacks.

On a similar note, it will be important to bring the RC on the step to our side of the field. There has been teams that reached far out during autonomous and grabbed RCs. We might want to build a mechanism to do so.

It would be awesome if we can also build something that could put a RC lying down back to its upright position, but we should think if this is a reasonable attempt given our limited time.

Getting all three totes during autonomous might be bold as of now, but getting two reliably would still be great. If we have two on our robot at the end of AUTO, we can quickly put this on the step for coopertition stack and start clearing the LANDFILL.

There is still an important improvement that can be made without adding anything on the robot. It is important that our robot does not collide or disturb other robots in our alliance and vice versa.

Also, it would be great if we can have a Emergency Belt Repair Kit with VHB-attached hooks so that we can quickly put a new hook on a belt in case one of them was removed. This would be helpful in tight schedule or during the finals.

Thank you all for reading! 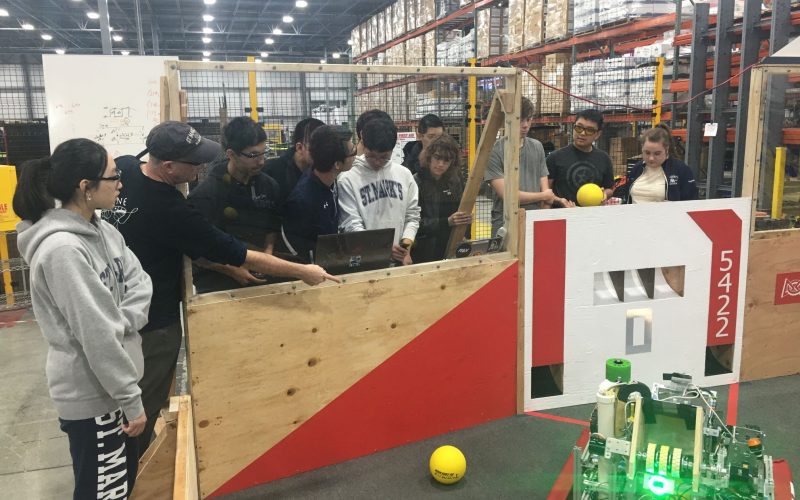 The scrimmage in Devens, MA at the Stormgears HQ went rather well for a week 0 event. The robot got

END_OF_DOCUMENT_TOKEN_TO_BE_REPLACED

Team 5422, or otherwise known as Stormgears, graciously invited us to participate in a scrimmage on Saturday, February 22, in

END_OF_DOCUMENT_TOKEN_TO_BE_REPLACED

As in recent years, Team 3566 will go fishin’ on February 27th to the 29th for first successes in southern

END_OF_DOCUMENT_TOKEN_TO_BE_REPLACED

First meeting with the Saturday class.